Is the World socialist? 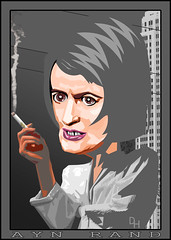 Ayn Rand was a Russian-American novelist, philosopher, playwright, and screenwriter. Rand is best known as author of The Fountainhead and Atlas Shrugged. She developed a philosophical system called Objectivism.

If you want to go back to the point where we decided to be socialist and try to undo it, you’re going to have to kill most of the people on the planet who depend on the current system for sustenance. And like it or not, that probably includes you. It certainly includes most of the idiots running around preaching Ayn Rand these days. – in The World is socialist

It’s funny how most people can’t understand that everything is interconnected to a point where it’s impossible to live without depending on something.